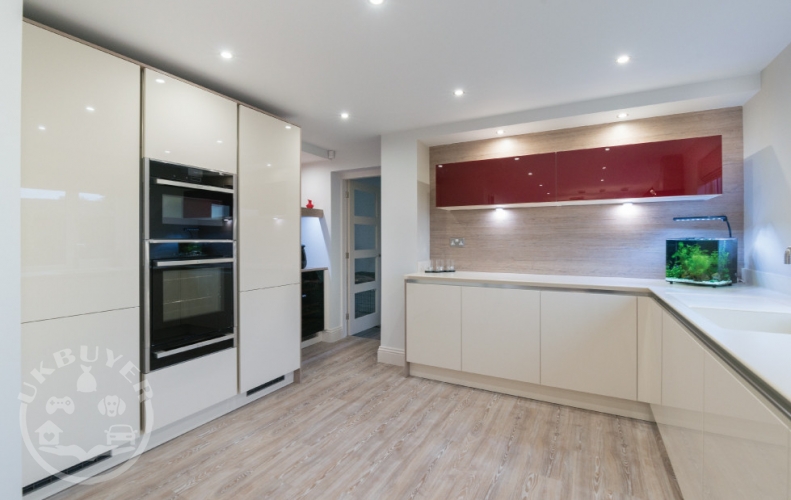 Wanting to bring their kitchen into the 21st century, a Barrowford couple opted for the very best German engineered units as well as all the very latest hi-tech appliances from Neff.

Instead of moving house, Andrew and Anita Millington decided to completely remodel their kitchen at their modern family home in Barrowford.

Knocking two walls down meant that the whole space could be opened up, as Maxine explains “The old kitchen was the original that came with the house when it was built”. It was quite dated and not really to their taste so Andrew and Anita decided to completely update it.

The kitchen was originally 3 rooms which comprised of a kitchen, dining room and utility room. In the customers mind they wanted to remove the wall between the kitchen and dining room but Maxine suggested removing the utility wall to open up the kitchen side of the room, which created a perfect space to house three tall housing units and allowed the the new design to relocate the utility to the garage.

Anita had a firm idea of a colour scheme, and liked the idea of red as an accent colour so Maxine incorporated wine red glass into lift-up wall unit doors, and wall panels above the dining table.

The units in the kitchen were handlesless in lacquered high-gloss Magnolia and these were teamed with a Vanilla Corian worktop with a ‘shark-nose’ edge which gave easier access to the handless trim. The worktops continued into the window sills, which were at the same level.

Silk Grey Oak was introduced into different areas of the room, which included the dining table, breakfast bar, and a feature panel behind the lift up wall units. Striking cream and black colours than running throughout create a stunning contrast with the doors and worktop.

They also incorporated a state of the art Quooker Fusion tap which combines boiling, hot and cold water all in one tap and a wine cabinet which stores wine at two different temperatures. Maxine adds: “When they decided not to move they didn’t want to compromise on anything and the end result is stunning. They love it!”

Delighted with her new open-plan kitchen that leads into a dining area and conservatory, Anita says: “We were really pleased with the plan that Maxine produced, there was so much more storage and that was what sealed it for me.”

Impressed with the visuals Maxine had created, the Millington’s wanted to totally update the kitchen in terms of the design and technology.

“We opted for Magnolia gloss doors, which is much softer than white and I wanted Corian as I wanted the overall finish to be smooth without any joints and avoiding the use of tiles. The red glass on some of the fascias continued this so it brought the whole scheme together. We also had experience of Neff before so we opted for all of Neff’s latest appliances as we want everything to be as up to date as possible,” adds Anita who works part time for the NHS. Andrew is an operations manager and the couple have a 19-year-old daughter who is currently studying at university.

“The end result is a kitchen that is modern with clean, crisp lines. We are absolutely thrilled with it – it has changed the way we live and how we use the house. Previously we only ever used the dining room at Christmas but now we have an open plan family dining kitchen that’s brought us back to sitting around the table again.”